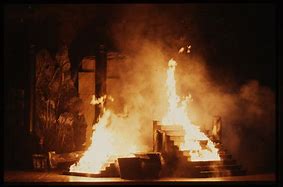 Today on the Roman Catholic ecclesiastical calendar, we are to remember the “Innocents,” the two and under males, slaughtered by the wicked King Herod to hold on to his throne.

With that as setting, some more secular and current thoughts about holding onto one’s “throne” — by hook or crook, thank you [possibly] John Wyclif centuries ago; Michael Flynn in beloved recent memory.
The question is could Don, who talks like a don, be as tough as Herod — with a 21st century tinge.
We will link the events calendar of 21st century apocalyptic politics to the Roman liturgical calendar.
So before, we too fly into Egypt, I own up to losing a bet as to how events would unfold like Wagner’s “Ring” trilogy [photo from Seattle Opera of the Gotterdammerung — loosely translated from German meaning, “not good, not good at all.”
I admit to being a “loser” because someone “caved.”
We must start our hegira with the passage of the “only” bipartisan major bill in Congress for generations.
As soon as the defense authorization bill passed Congress with its “let us NOT praise Famous Confederates” language, while 45 was whining about “social media” protections that needed to be added to the verbiage on national security, I bet with Lillian [no money changing hands] a veto was forthcoming.
And with Congress dawdling over pandemic relief [stimulus, are you kidding; we’re talking about unemployment compensation] and per usual, with a special tip of the hat to “Leader” McConnell and “Chairman” Shelby in the Senate for literally doing nothing for months on any spending bill to keep the government open for other business.
Only the “knight in shiny aluminum foil,” Steve Mnuchin was visible from 45’s minion, most of them “acting,” saying “let’s make a deal.”
And then be forced to watch with “amusement” when throw up-your-hands Republicans in the House and Senate and scream in righteous indignation over “pork” — except for farm subsidies to get around Chinese tariffs and “waste,” ignoring which fat cats dove into the trough of payroll protection funds, “you handed us a 6,000 page bill to pass tonight.”
Hey, we’ve been here before. [Anyone remember as far back as two years ago, 45’s and the Republican-controlled House and Senate shutting the government down for a month over Christmas — the “war on Christmas” carried to a new front.
Well, boys and girls, the country has been without a budget, a “spending plan” since Oct. 1.
Out of fear of losing two Senate seats in Georgia, enough Republicans held their noses and voted to pass the bill.
I predicted a veto on the whole package — days before the “measly” $600; and it looked even more probable as they haggled up to the deadline when the “pocket veto” could be the “ways and means” for Herod on Pennsylvania Avenue to inflict more pain on other than two-year-old male children before he took flight — to southern Florida.
No fuss, no muss.
But alas, 45 caved — with nary a tweet in explanation! [He likes “bangers,” I like “bangers”]
Roy Cohn and Fred Trump are rolling in their graves.
[Personally, the “check” — signed by his highness or whoever — whatever the amount won’t be coming to us; we don’t need it and didn’t get the first, but millions of MAGAs do.]
There went the Gotterdammerung.
The “American carnage” boy — “I alone can fix it ” still has a few more shots.
January 6 [Epiphany for you folks keeping ecclesiastical score or Twelfth Night for revelers] and the tallying of the electoral vote.
Will newly oathized Senator Tommy Tuberville lead the Johnny Jump-Ups in the Senate in protest? Here’s hoping he joins his ‘Bama colleague Mo Brooks in the House.
Or the Proud Boys drinking it up at Harry’s Bar — can’t afford the Pennsy Avenue Trump Lounge.
Hmmm, intriguing.
And then there’s January 20 — no coffee or tea with the “usurpers,” no show at the Capitol, lift-off from White House, buzz all of Pennsylvania Avenue at noon.
It could have been so much better — if he only had a “spine” [See Ray Bolger, Bert Lahr, Jack Haley and Margaret Hamilton in “Wizard of Oz” for more details.]
The beauty of the Carnage — government shutdown, pandemic raging, no budget for this year, no relief — is breathtaking — promises made; promises delivered.
And blame Hunter Biden for it all!
Gotterdammerung light.
And closing out the ecclesiastical calendar for Jan 20, it is the feast day of St. Sebastian, he who was used for target practice by the Praetorian Guard.
45budgetcarnageecclesiasticalEgyptflightHouseHunter BideninnocentspandemicRepublicanssenate