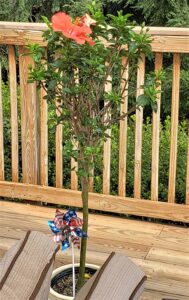 Although we pulled off a Saturday evening on the deck — shrimp, salmon, cheese, and wine on the menu, it was “a close-run thing” or possibly “a damned nice thing.”

[Please note how we slyly incorporated Winston Churchill’s patting himself on the back book title for single-handedly winning World War II and Arthur Wellesley, aka 1st Duke of Wellington as “quoted” by interviewer Thomas Creevey after Waterloo. For all you lovers of “nice things,” nice here reverts to its meaning of “uncertain.” Please put “Art’s quote” alongside that of David Glasgow Farragut’s “Damn the Torpedoes” or something like that when he decided to visit Fort Morgan, Alabama in 1864. Please contact Matthew Eng for full accounting of Farragut’s observation while high above the fray. But as usual, I digress.]

While in non-plague years, summer thunderstorms — with all their sound and fury — arrive in the fading hours of afternoon or early evenings [by the fifth inning of Nationals’ games that start at 6 or 6:30 p.m.; third if first pitch is 7:05 or slightly later]

But in Plague Year 1, C.E. [we’ll adopt C.E. — common era, since “we’re all in this together,” here for time reference], they arrive scattershot after the noon bell. Swift, mean downpours that alarmingly knock out power [survivable], but worse yet all disrupt broadband connections [and in our household, landline phone service as well].

That was the situation again yesterday about 4 p.m. So hurriedly cushions must be stowed, a hint of that concern in latest picture of the “Shy Hibiscus,” again few blossoms. Shy’s “Friend,” however was again blooming; but alas, the promised yellows and pinks were nowhere in sight.

Also for the observant, note the patriotic pinwheel — in celebration of our two great parties’ virtual national conventions — rising between the upturned cushions.

As for why, these images were made, the phone’s camera — a Samsung 4-G’er — was refusing to leave “single shot sweeps,” a personal bane.

Yesterday’ afternoon’s “Gathering Storm” proved only to be a sprinkle — but with the accompanying sound effects at 4. Ah “the phoney war,” the eight-month lull on the Western Front after the invasion of Poland in 1939.

Tuesday’s “sturm und drang,” sometimes translated as “storm and stress” arrived about 8; and of course, knocked out broadband as the ground crew at Nationals Park in the fifth inning were ready to roll out the tarp.

We had already covered the table with our tarp.