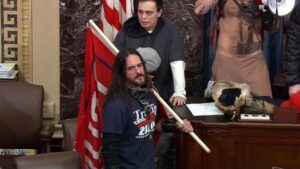 Paul Hodgkins of Florida is now trying to undo his guilty plea to a felony change connected to Jan. 6. [ABC News image]

Although the independent commission to detail  the mob assault on the Capitol Jan.6, what actually happened before, then and there, and its immediate aftermath was dead before arrival in the Senate, Virginia Democrat Tim Kaine detailed ‘the then and there” and “the what followed” in the Washington Post Sept. 21.

And it isn’t a pretty picture.

“We were barricaded in the chamber with Senate staff for 45 minutes, listening to the rampagers outside. At one point, we heard gunfire. We were eventually escorted to a Senate office building, twice in view of rioters battling with Capitol Police. There, senators and dozens of staff members were packed shoulder to shoulder into one room for hours during the peak of the covid-19 pandemic. Television screens showed the attack as it was happening.

“That attack was promoted by a president willing to trash American democracy and invent lies about election fraud because of his inability to accept that he had lost. It was more than just a violent protest or even a riot. It was a deliberate attack on a particular day and time specifically designed to overturn an election in which more than 80 million people had chosen Biden and Harris to be their next president and vice president. It was the biggest voter disenfranchisement effort in recent American history.”

Kaine certainly didn’t see any “ordinary tourists” that day – as several Republican congressmen claimed, but I guess he was viewing the event through  a “partisan” lens.

Alaskan Republican [in name only to many in the GOP, like former President Donald J. Trump] Lisa Murkowski told the New York Times in a Sept. 18 story after seeing a Capitol policeman trying to cleanse his eyes of [unknown but blindingly irritable] spray that day in a bathroom near her ”hideaway.”

Even now, Murkowski told the Times she can’t go back to what was supposed to be her safe spot.

“I really liked it, but it was just too much déjà vu. That memory is still there. That little public bathroom right across from my hideaway — I can just still hear the awful sound of the officer as he was trying to rid himself of whatever the spray was. …

“But you know, nobody wanted me to be by myself [during the spring recess]. There were heightened threats, apparently, that we had to be attentive to, and I respect that. But I didn’t like the feeling. I felt that my wings had been clipped.”

One-time leader 45, never missing a beat, has already endorsed Murkowski’s challenger in the Republican primary. The incumbent committed the most outrageous sin; she voted to convict him of high crimes and misdemeanors in his second impeachment trial.

Back in early February I wondered what, if anything all the huffing and puffing of local to Washington, D.C., federal prosecutors and non-top tier FBI officials about bringing to justice rioters, plotters, and abettors of all the events surrounding the Jan. 6 “protesters.”

“Step up big boys” was my charge to them; do your jobs.

Most of those were misdemeanor pleas like “improperly parading, demonstrating of picketing inside the Capitol.”  The Washington Post compared those charges to the ones given to White House fence jumpers.

Let’s say, some judges – often Republican appointees – are handing down “civics lessons” to Jan. 6 defendants’ lawyers as well as sentences of their clients.

As the Hill Reporter and the Post published Jan. 18, the day of the fizzled “Justice for J6” rally,

“As federal judges appointed by both Republican and Democratic presidents work their way through the cases, they are becoming increasingly weary of the attempts at revisionist history. “What happened on January 6th was not a peaceful demonstration,” U.S. District Judge Paul L. Friedman said in sentencing the latest misdemeanor defendant Friday to probation, 120 hours of community service and $500 restitution. ‘Every participant in [the Capitol breach], for no matter how many minutes, contributed to an assault on democracy and democratic norms that continues to resonate in unfortunate ways.’

“At an earlier sentencing, U.S. District Judge Thomas F. Hogan, a Ronald Reagan appointee said, ‘Patriots are not the ones who attack the operations of Congress.’”

[Judges Rejecting The Label Of “Patriot” For Insurrectionists | HillReporter.com]

As of Sept. 17, 595 individuals have been federally charged and 122 of those face assaulting law enforcement charges.

But those who have pled to charges weren’t, for the most part, the plotters and abettors.  At least two federal judges in Washington have said severe felony charges against 18 Oath Keepers are too vague when other defendants like those disrupting a congressional hearing are charged with misdemeanors.

So we’ve got a lot to see how this part of the story turns out.

And the charge remains: “Step up big boys;” do your jobs.