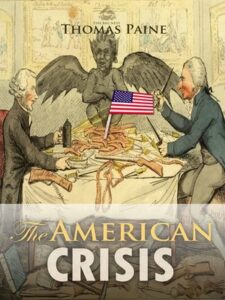 In the year of the plague, during the third year of 45.
“These are the times that try men’s souls. …”
Start from there in this Year of the “American Crisis.”
“Sunshine Patriots” was Thomas Paine’s description of it then ; and it applies today in crises of deadly contagion — a fitting 18th century phrase, economic collapse, and great inchoate fears that all has spun out of control.
Strip away the patriotic hoopla and 244 years of fireworks.
Americans, looking at Virginians as historian Michael McDonnell did in “The Politics of War: Race, Class, and Conflict in Revolutionary Virginia,” particularly the well-to-do — including those in the Revolutionary government in Williamsburg or their county underlings, weren’t leaping into the fray.
Nor likely were “their offspring,” the white ones.
They — fathers and sons — had other things to do.
Sound familiar. “Common cause,” not so much.
As Paine saw it then, Washington had ordered the Declaration read to his troops as soon as he had copies in hand. It was a “why we fight” muster.
But “Patriots” in Williamsburg, who received the news on July 20, were by that December ready to throw out their new Constitution and install Patrick Henry with dictatorial powers to save the new “state.”
But the “they” weren’t willing to pay the price and used the law to shift the twin burdens of taxes and war from their shoulders to their lessers, even to “middling men,” merchants.
Why the furor after such glorious words and an indictment of a tyrant in London from one of their own, as edited by committee?
Because by that winter, all across Virginia there was no rush even of “rogues and vagrants” to sign up for Washington’s “New Model Army” or the state forces — to arms, to arms, not really, you mean someone else!
The war going miserably. Trenton and Princeton a year and a half later barely budged the numbers of “volunteers” upwards.
At a compulsory militia muster in Loudoun County in fall 1776, and remember all males over 18 had to be put on the militia rolls, not even huge bounties in cash and lands could entice more than a handful to step forward.
Full of “revolutionary fervor,” not by a long shot — certainly not for “free white men” of any means or fast enough to
escape musters.
There were already loud complaints that this was “a rich man’s war, but a poor man’s fight.”
Ever hear that before.
And yes, anyone on those muster rolls could be compelled to serve if county quotas for bodies in arms set by the “Revolutionary Government” were not met.
The “draft” wasn’t born in the American Civil War.
Numbers, numbers, numbers., always numbers. Or were they worried about the “enemy within?”
You betcha.
The slaveholders that dominated the Revolutionary Government in Virginia closed their eyes as recruiters, possibly as early as 1775 and certainly by1777, started signing up free blacks.
Lord Dunmore, the Royal governor in flight, already was offering freedom to all slaves who rallied to his side in the Ethiopian Regiment, so let’s just call these “Founding Fathers” actors in their own “enlightened self-interest.”
Of all things, when recruiters couldn’t meet “their numbers,” they turned a blind eye as to whether that African-American in front of them was actually free.
After all, recruiters received a commission for the bodies they delivered, so …
My Lord, hey my slaves are running away — said the startled “patriots,” many still in their homes — called manors in 1980s Virginia travel ads, but plantations.
“Essential workers.” Think I’ve heard that before too.
‘Cept there was a difference between then and now.
The “original sin,” as we call it now.
Or as the maser of Monticello described “the institution” — holding “the wolf by the ear and we can neither hold him nor safely let him go.”
The “Virginia way” is compromise:
So the master and his sons don’t want to go — they’re too busy or whatever, but he sends a slave as a “substitute.”
“Essential worker” as pawn.
And after the war is won, the “substitute” is a free man, but not his wife or children — if married.
Read Thomas Paine on the Fourth.
" middling"essential workersfugitiveMonticellomusterPainerevolutionaryslaveholdersVirginiawar
Share This
RECENT POST
CONTACT
703-250-4869
john@johngradynowandthen.com
If your organization is interested in having John speak at your event, please call: 703-250-4869 or email john@johngradynowandthen.com
CONTACT JOHN
© Copyright 2018 | John Grady | All Rights Reserved | Site by d2dcreative.com
Back To Top
×