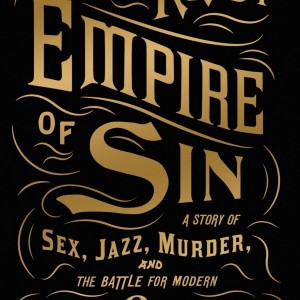 I picked up Gary Krist’s Empire of Sin, A Story of Sex , Jazz, Murder, and the Battle for Modern New Orleans on a whim and memories of first visiting the city in 1975. Coming up on the 10th anniversary of Katrina’s devastation of the Gulf Coast and the breaking of the levees flooding the lower lying parts of the city and neighboring St. Bernard Parish, I figured this would be timely reading for the late summer.

And no, it’s not about Katrina, Camille in 1969, or even the Rising Tide: The Great Mississippi Flood of 1927 and How it Changed America, detailed so wonderfully by John Barry. It is about this city’s long-running history with vice (think the legalized brothels and cribs of “Storyville” district literally across the street from the French Quarter and meet Tom Anderson — politically powerful and a very rich man from his pleasure house’s profits).

It was Anderson and others in the Ring against the self-righteous reformers — a number of them with long ties to the “Redeemers” who took back political control of the South with a vengeance as Reconstruction wound down. Near the end of Krist’s story the United States Army joined in worried about its soldiers training there becoming infected with every manner of sexually transmitted disease.

Crime — murder topping the list of course but many well-publicized cases remaining unsolved; ethnicity — the arrival of Italians primarily from Sicily– “Black Hand” and not the Mafia; race — always an issue and sometimes a deadly one; and music (“Buddy” Bolden, “Kid” Ory, “King” Oliver, “Jelly Roll” Morton, Sidney Bechet and Louis Armstrong) over 30 remarkably tumultuous years are all present and well accounted for.

Krist’s is writing about New Orleans’ epic struggle with itself. But as he noted, “New Orleans’ reputation as a center of sin and perdition had dogged the city virtually from its founding in 1718” as the Gulf Coast anchor to the French territorial claims in North America and their clear intention of keeping the British pinned behind the Allegheny/Appalachian mountains.

We all know that failed. The Americans, former British colonials arriving with voracious appetites for land, soon enough were spilling over those peaks, driving wagons though their gaps, and paddling canoes and poling flat boats along the river valleys particularly the Ohio to the Mississippi.

Fast forward into the early 20th century and drill in on two remarkable sisters, Kate and Jean Gordon, the never married daughters of an immigrant Scot schoolmaster as examples of the Janus-faced reform movement in New Orleans. They worked tirelessly on women’s suffrage as a means of curbing prostitution, gambling and alcoholism; improving public health; and changing child labor practices. “They also lent their support to the cause of racial purity as embodied in Jim Crow legislation and the disenfranchisement of Louisiana’s black population. The sisters as the heads of the Milne Asylum for Destitute Girls went so far as to advocate for forced sterilization of children “who showed signs of a future in crime, prostitution of alcoholism,” in Krist’s words.

With the passing of the 18th amendment barring the manufacture, transport and saIe of “intoxicating liquors,” the reformers had control of the “much less colorful city.”

“The city’s unique atmosphere of open, legally sanctioned vice was now a thing of the past, eviscerated not just by local reform efforts but by national measures as well. Prohibition and female suffrage — both of which, according to moral crusaders like Jean Gordon, would usher in a time of greater virtue and political accountability,” or so they thought.

“The vice that had been practice openly in the city in the early 1900s had merely gone underground … festering speakeasies, illegal gambling dens, and secret assignation houses.”

Empire of Sin is a wonderful book about an  amazingly American city.

Black HandbrothelsJim CrosNew OrleansprostitutionreformStoryvilleTom Anderson
Please Share This
RECENT POST
CONTACT
703-250-4869
john@johngradynowandthen.com
If your organization is interested in having John speak at your event, please call: 703-250-4869 or email john@johngradynowandthen.com
CONTACT JOHN
© Copyright 2018 | John Grady | All Rights Reserved | Site by d2dcreative.com
Back To Top