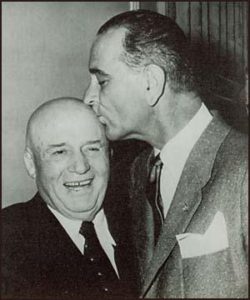 Where are the Sandra Day O’Connors when it comes to appointing judges to a federal appellate court or the Supreme Court?  Elite schools, clerkships in all the right places, appointments [not election] to high office, etc., etc., that’s their shared background.  Those who stood for elective office , like O’Connor for an Arizona State Senate seat,  are a vanishing breed on the highest levels of the federal bench.
Legendary House Speaker Sam Rayborn had it right when assessing the “Best and Brightest” in the JFK cabinet and agencies with Lyndon Johnson. It applies to the federal bench today– in spades:
“I’d feel a helluva lot better if just one of them had ever run for sheriff.”
O’Connor attended an “elite” school — Stanford, at least it wasn’t Harvard or Yale [now the seeming  academic prerequisites for consideration].  Those schools are the right blocks to check — regardless of the party controlling the White House  and the Senate to be on the short list for appointment.
Sonia Sotomayor comes to mind [Princeton undergrad; Yale Law — Check].
http://www.washingtonpost.com/news/speaking-of-science/wp/2018/07/11/every-supreme-court-justice-attended-harvard-or-yale-thats-a-problem-say-decision-making-experts/?utm_term=.4084fc9af4d9
Brett Kavanaugh joins the increasingly [and distressingly to me] long line of nominees  thinking great thoughts about William Blackstone and Edward Coke [who ran for Parliament at least], Learned Hand and Louis Brandeis [who didn’t run for Congress}. These nominees and confirmees — if that’s a word —  never had to face the wrath of voters on potholes, vandalism, feral cats, sex education in elementary schools, et al., decide on taxes, or have a checkered past of advocating wartime internments of the “Fifth Columnists” and “Achilles Heel” that were the hundreds of thousands of Japanese and Japanese Americans living in California like that wild man Earl Warren.
Would a volunteer in the Army for a war, a graduate of Boalt [Cal Berkeley’s Law School], an elected district attorney, attorney general and governor even be considered?
Rayburn had it right,  But as a House member, he wouldn’t even have to have been asked what he thought about a nominee.  The Speaker was a man of no consequence. He wouldn’t have had a vote.
He also didn’t have a vote on any of the “Best and Brightest” and we know how that story is still turning out.
BlackstoneCokeeliteHarvardO'ConnorsheriffSotomayorSupreme courtWarrenwrathYale