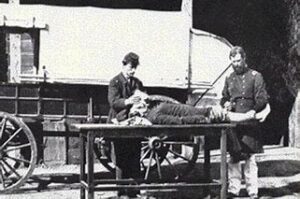 “I had to use opiates for a complication of painful diseases.” A Mississippi veteran said the painkillers he’d been taking since they were prescribed for him during the war had “its iron grip on my very vitals and held me enchained and enslaved for near fifteen years.” The quote wasn’t from Beth Macy’s 2018 masterful exploration of this America’s descent into opioid hell in “Dopesick.” It begins Jonathan Jones’ essay, “Opium Slavery, Civil War Veterans and Opiate Addiction” in the current edition of “The Journal of the Civil War Era,” vol. 10, no. 2, June 2020.

To put the quotes in context, former Lt. Albert Wymer Henley, who had been battling chronic diarrhea and typhoid fever, had become hooked on morphine during the 1863 siege of Vicksburg.

As I read the piece, I remembered Dana Priest’s and Anne Hull’s groundbreaking reporting in the Washington Post on a military health care system failing a new generation of veterans. The shambles they exposed in the 2008 Pulitzer Prize winning series was greater than the two-word shorthand for scandal, “Walter Reed,” and what occurred [or in too many cases, didn’t occur] there.

Time and again in the congressional investigations that followed and the “Blue Ribbon” panels’ reports, and the follow-on coverage by reporters like Kelly Kennedy, the over-prescription [and theft and bartering] of painkillers came up as an endemic problem in the military and veterans health care systems. Quoting from the Post’s submission in the Pulitzer public servicecategory, “Mologne House [used to care for the wounded assigned to Walter Reed] is afloat on a river of painkillers and antipsychotic drugs. … The scandal has reverberated through generations of veterans.”

“Generations of veterans” — got that right and the “scandal” still is reverberating through the larger society in the vise of a viral pandemic and presidential rants to “dominate the streets.”

The opioid epidemic hasn’t gone away, although it’s buried in the “haste of news.” About a month ago, Lake and Tumbull counties, Ohio sued Walgreens, CVS, Rite-Aid, WalMart, and Giant Eagle [a regional grocery chain] who they claim “helped fuel a national drug crisis that resulted in more than 430,000 deaths since 2000.”

Barely any play outside of northeastern Ohio and northwestern Pennsylvania.

The numbers of dead listed in the suits far exceed veterans who died as a result of the over-prescription of opioids in the same period.

I’m going to offer a far-fetched defense that “it’s always been this way,” so don’t blame us.

Because the essay appears in a scholarly journal, Jones’ focused on Civil War veterans; but he did acknowledge the country’s long-term drug addiction — and alcohol abuse. “Opiates were among nineteenth-century America’s most commonly used medicines. Antebellum physicians recommended opium, morphine, laudanum, and other opiate preparations” for a host of ailments — constipation, diarrhea, pain, etc.

Diving a little deeper, we find:

Laudanum, often called the “Women’s Friend,” can best be described as a “cocktail.” Although measurements varied by whoever made it, the key ingredients were morphine, codeine, and alcohol.

The far-fetched defense for an epidemic inside the pandemic during the days of rage.

The flip side of that defense would be: heroin is making a strong comeback, so let us go. Oh yeah, heroin is a morphine derivative.