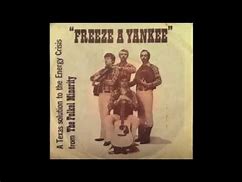 You gotta love Texas Governor Greg Abbott blaming wind turbines that froze in the storm, green energy initiatives all round, for a power system the Texans bequeathed to themselves decades ago — because they were “rich” with petroleum and natural gas.

He righteously demanded an investigation into how this all could have happened.

The good ole “Don’t Mess with Texas” governor, of course, certainly wouldn’t have wanted to lay in blame on the “wild-catting,” “freebooting” history of all things capitalistic in the Lone Star state.

Start there, your excellency.

It doesn’t mean “feast at the trough; there’s more of that from where it  came from.”

And don’t lecture California about its ridiculous handling of Pacific Gas and Electric and out-of-control wildfires — as you were wont to do.

Now speaking as a person who once was long-married to a Texan — never voted for zoning, in her life — “too restrictive” until a housing development went in right next to our farm without so much as a “howdy,” I also would like to remind Texans and indeed all “the oil patch” into Wyoming of your gloating in the 1970s.

Yessirree, Bobby, I certainly do remember your “Freeze a Yankee” campaign[s].

Billboards in Ohio and Pennsylvania.

You trotted those “stalwarts out” to get “new natural gas prices” vs “old natural gas,” as determined in Morgan City, La.

And every time, there was an OPEC oil embargo or slowdown in production and rationing began with humongous gas lines to get enough fuel to get to and from work  — most appropriately occurring in the winter when oil and natural gas also were needed for heating homes across the Midwest, Mid-Atlantic, and New England.

Power failures are a b …., especially when choose to do everything on the cheap.

Or “what goes around, comes around.”