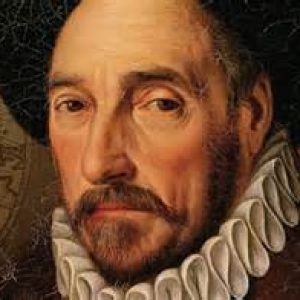 A lifetime ago, I had to read one of Michel de Montaigne’s essays in a freshman philosophy class.  All I really remember about that experience was the title had nothing to do with what was down on paper. There had to have been some type of discussion about that and the essay itself, but both are long gone from memory.

Since I had already dropped a course in logic — way too much math for my tastes {should have caught that since it had a dual listing], I had to stick with this one to check off a requirement. I stuck with the class, and there was no more Montaigne.

I thought I was done with Montaigne, not quite.

Move slowly and through much time and distance, and I am talking with a friend about quirky things we’ve experienced, known about or read.

Up pops Montaigne again, in the conversation.  Montaigne’s tower where he wrote and got away from his family but played with his cat, his public life — always surprising to me how many other things men like Dante, Chaucer, et al., did when they weren’t “thinking great thoughts” and “writing great works.”

Friend couldn’t remember the name of the book but was sure it was written by an Englishwoman.

So with a Google search, I found this real gem of a book by Sarah Bakewell on Montaigne, the 16th century French philosopher who survived that country’s deadly wars of religion.  In its pages was  something of an answer to the question that lingered about why the title had nothing to do with the essay.

As Bakewell in her 2010 “How to Live or A Life of Montaigne [in one question twenty attempts at an Answer]” put it, “The trick is to maintain a kind of naive amazement at each instant of experience — but, as Montaigne learned, one of the best techniques for doing this is to write about everything.”

And yep, this is in a chapter with subtitled, “Stream of Consciousness.”

Her “How to Live” is one of the quirkiest biographies I have every read, certainly with one of the longest titles, and a delight from start to finish.

But for another view of Montaigne, who had more than his share of quirks, check out Dana Stevens’ thoughts in this link:

Stevens has her ideas on how he made the most of every moment.  In Montaigne’s case, it was avoiding the family.