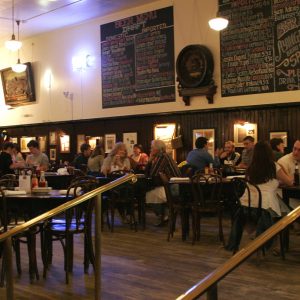 Before we checked out of Boston’s Parker House hotel [and yes, we had the rolls and Boston Cream pie and toasted Frank Skeffington — in the Last Hurrah bar and Eddie Coyle — who had fictional friends in the Whitey Bolger Irish thug mold — while at the same consigning the Brahmins on Beacon Hill the to the ninth ring of Puritan hell], we stopped at Jake Wirth’s on State Street in the theater district.  It was a blistering hot mid-May Friday. Upper 90s with humidity to match  qualifies as “blistering hot.”

Since Lillian had been to the Union Oyster House on a quick in-and-out train ride to Boston the year before and following our recon patrol to find where we were supposed to be the next day, I felt she needed to dine at Jake’s, the city’s second oldest continuously operating restaurant. It also was close by the conference site off the Commons.

As the story goes, Jake immigrated from the same area of Germany as Mr. Anheuser and sold [still sells] his product in the mid 19th century to thirsty Bostonians.  “No Brahmins need apply” signs should have hung above the long bar, but not sure they did.  Unlike some other historic eateries and watering holes, notably the Berghoff in Chicago’s financial district and McSorley’s in New York’s East Village, he allowed women [not known if they had to be accompanied by a man] into his establishment well before NOW demonstrations and a court order at the height of the Vietnam War.

Apple strudel for dessert, split with the phone-photographer.