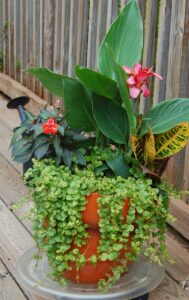 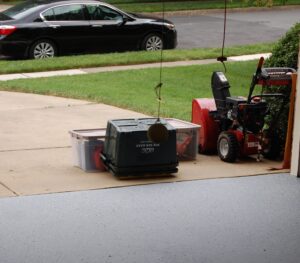 The plague forced us to put off  a number of projects around the house. Most noticeably to the residents was the need to repaint the kitchen and installing a protective rail to prevent chairs from scruffing the wall before the primer and new paint  were applied.

Other work that needed to be done – some dating back to when we bought  the house as Joe Biden had just settled in as vice  president and Donald John Trump was a “celebrity” — like the cracks in portals caused by a mid 5 on the Richter scale quake shortly after we moved in.

Welcome to the far reaches of Fairfax, actually less than five miles from where we had lived [and a diagonal change rather than a push southward].

And the no-skid garage floor after a decade of in and out by two drivers and several more cars was peeling.

Due diligence – Lillian’s surveying of neighbors’ posted thoughts on who was best and soliciting bids from three.

Selection made; work performed – beautifully, clean-up perfect; of course, I’m reacting with steady tears, constant sneezing, and  an aching throat to the fumes.

[Should be noted, the 220-plus houses in and about us  – all four styles – have basements; many, likely a majority of the estates, but not starter castles, find the attached garages more suitable for goods storage, not vehicle storage. Hence the pix of how we joined in – cars on the street and driveway and best yet, we showed the world many of our prize possessions, snow blower, maul – which shouldn’t have been left out, rakes, brooms, et al. Lillian did bring inside the wooden baseball bat. Our public flaunting of material wealth ended shortly after 9 Sunday morning, the first official day of summer.]

What was most surprising, when Lillian contacted the painter late last week believing he had left a frame behind.

When Lillian came out on the deck with the plant, I was as amazed as she had  been. She  said the craftsman had bought the plant as a thank-you to us for treating him respectfully from start to finish.

Neither of us had ever had this happen to us before.  Yes, we had gifts from real estate agents/realtors on buying a house; and I received something for a major home improvement projects decades before, but nothing like this for such a small contract.

We could only guess that the plague hadn’t brought the best out of so many others who paid for his services and time. [I have to add, all too often in Washington’s metropolitan area, the “don’t you know who  I am” arrogance is the rule rather than the exception.]

As for the frame, it went back around the step from the garage to the laundry room this morning.