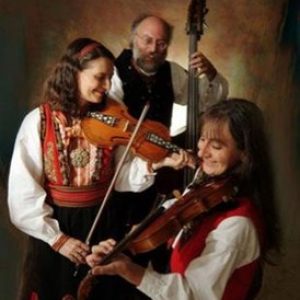 The Washington Revels celebrated the coming of the shortest day of the year in fine fashion with its Nordic themed winter solstice production at GWU’s Lisner Auditorium, just concluded. Andrea Hoag, Loretta Kelley and Charlies Pilzer were among the dozens of guests artists performing with the Revels Company.
Having only been in one Nordic country [Iceland — western Wisconsin, Minnesota and the Dakotas don’t count and neither does going to Midsommarfest in Chicago’s Andersonville “on way North Clark Street” sometime in the mid 60s], the music, dance, drama and hammy children’s sketches [Nisse in the Barn and Little Frogs] were a delight.
Of course, the Revels wouldn’t have skipped and didn’t omit Sankta Lucia, the Festival of Light. [I remember as a kid seeing a Christmas Around the World show at the Museum of Science and Industry and being terrified that the hair of the girl wearing a crown of lighted candles was going to catch on fire. It didn’t. The Revels used battery-powered candles.]For 25 years, I have enjoyed and looked forward to these Christmas Revels performances. I love the end of the show after all the performers have taken their bows the behind-the-scenes crew — makeup, sound, production lighting, etc., also have their turn under the lights.
What is particularly touching is the last group coming on the stage — concession sellers, volunteers of all kinds — to hear the usually packed house audience cheer and clap for them.
It makes Revels something special.
Revels offers performances year-round and special events.
Here is a link:
https://news.usni.org/2016/12/19/experts-pyongyangs-nuclear-intentions-unclear#more-22938