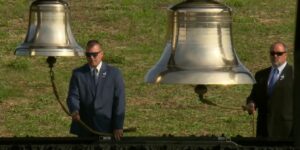 I certainly never believed that George W. Bush was much of an orator, always looking like a smirking prep boy when he speaks.  For all of that he has certainly left the first quarter of this century with two memorable phrases: “Axis of Evil,” referring to North Korea, Iran, and Iraq and on Sept. 11, 2021, “children of the same foul spirit” to describe the “disdain for pluralism” shown by extremists abroad and at home.

And being a child of the Sixties, well, you get it, look around you – the True Believers are here.

NYT columnist David Brooks on the eve of the 20th anniversary terrorist attacks on the United States wrote about this “disdain” by “wannabe authoritarians in American and Western Europe who have latched onto Christian symbols – crosses, “crusades,” et al. in their unending passion for “us” against “them” of white-identity pseudo-religious politics.

In the case of the next generation Tim McVeigh’s and the Oklahoma City bombing crew, “cultural wars” are never enough – if they don’t get their way.

Thuggishness – think Charlottesville in 2017 and the Capitol Jan. 6, 2021 – come readily to their minds to put an end to “social and moral chaos.”

They are that spirit’s spawn.