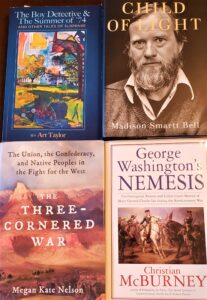 The Third Book with a Bonus:

I have been a fan of Robert Stone’s novels since the very early 1970s when I was still in the military. All are darkly American works on where we were as a society as he was writing them. What made the novelist particularly appealing to me early on was knowing that Stone was connected in some way, at the time I didn’t know exactly how, to Ken Kesey.

I wasn’t thinking the author of “One Flew Over the Cuckoo’s Nest,” as novel or Jack Nicholson movie, but the “Merry Pranksters” of Tom Wolfe’s “Electric Kool-Aid Acid Test” with the Beat demi-god Neal Cassady as bus driver and tour guide.

Perfect reading before basic training at Lackland AFB, Texas, to set the stage for what would follow.

Over the years, Stone met my test as a reliable guide, a pathfinder, into a chaotic society. To be honest, after 9/11, I had not forgotten Stone, but wasn’t that interested in “Bay of Souls” and “Dark-Haired Girl.”

Before the pandemic shut the world down, I read that Madison Smartt Bell, a noted author in his own right, had completed a biography of Stone, “Child of Light,” and collected a number of his non-fiction pieces into a separate book, “The Eye You See With.”

Being as hooked on Stone as I am, I bought both. The “Harpers'” material in the collection resonated with me even now. Some of the others seemed dated, from a time long ago. But Bell’s portrait of Stone is sharp-eyed, but familiar drawing heavily on Janice Stone, Robert’s wife, from interviews and her notes and his experiences with Stone. The author a biography of Toussaint Louverture and “All Souls Rising” has captured Stone’s singular and peripatetic life and dissected how the novels came together [Janice kept the convergence of characters and events straight and continuous] and set them in the frame of Stone’s life and American society then.

Bell doesn’t spare the details of the daily pill-taking, alcohol consumption, heavy smoking — you name it and Stone probably tried it, existence that his subject lived. Though he could blow through deadlines as if no boundaries had ever been set, it was amazing the amount of notable work Stone produced over his career. One National Book Award winner, two finalists in that judgment, and twice a finalist for a Pulitzer in fiction is a remarkable achievement — even if stone-cold sober and straight.

If you’re a Stone devotee, both are must reads; if you want a taste of Stone before committing, try one of his novels.

These are my favorites, in order of preference, and not all his works are included:

“A Flag for Sunrise,” “Children of Light,” “Dog Soldiers,” “Damascus Gate” and “Outerbridge.”

I need to re-read “Hall of Mirrors,” set in New Orleans amid the rise of right-wing demagoguery to beat down a burgeoning civil rights movement. Current events, office-holders, and their media shriekers and sycophants may pull it to the top of my list.

But that’s for another day.