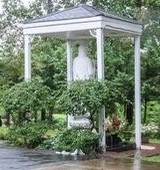 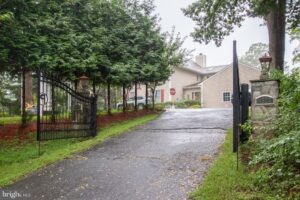 Coming down a twisting hillside on an out-of-date country two-lane,  just before it dead-ends at a four-lane roadway named for a pre-Revolution British general, there was set on the highest point visible —  for a fleeting moment on  the right —  an identifiable,  imposing Buddha — six, feet, seven feet high or more, and a flash of a Republic of Vietnam flag.

Then the traffic signal turned green to turn left so the driver moved on or  the driver usually coasted through the red to head right.

Coming from the other direction, up the old tobacco road, the back of Buddha and the flag are invisible. From the road, there’s only a steep driveway — must be deadly slick when wet, iced, or snow-packed — to be seen, and trees, lotsa trees visible.

In the car culture of the marches of Washington,  only drivers and passengers have the view — as blink-of-an-eye as it is.

You have to know, like so many streets, roads, even multi-lane boulevards “in the shadow of the Capitol,” there is no sidewalk on the grand Buddha’s side. A pedestrian heading downhill has taken his or her life into their hands.

Across the old road, there’s an asphalt path on the edge of a cemetery, where, if not obstructed by moms’ and dads’ minivans  and SUVs, panel trucks for painters and handymen, Amazon and UPS two-steppers, lawn service and tree-removal vehicles with sky-high chippers on trailers, a walker could conceivably make out a large standing figure — but not really discernible as Buddha.

And then, the apparition was only visible from late fall through early spring.

You really had to know something, whatever it was, was there.

For the decade we have lived in this part of the far reaches of Fairfax, behind the cemetery, across the ambushed general’s roadway from the State Police’s NOVA nerve center and a Virginia Army National Guard digital outpost, I and Lillian thought the towering Buddha was erected on entrance to the American home of a prominent and well-off Vietnamese refugee’s home. The Vietnamese population in the county is put at 3 percent of Fairfax’s 1.2 million plus residents.

Then, there was a posting of the “Sale” sign for 4522 Burke Station Road in mid fall.

Our curiosity was piqued, so what else could we do.

Of course, we Googled the address to find out how much the owner was asking for the property — with or without Buddha.

The revelation was stunning.

In a real estate agent’s phrase, the property and structure provided “upscale privacy” for more than  $850,000 — not out of the ballpark for houses with less land than the temple’s. I don’t know whether it is still “on the market.”

Although the sale sign remained, the towering Buddha and the Vietnamese flag were gone around Thanksgiving.

On a blustery, brilliantly sunny Sunday, I turned up the incline.  A Vietnamese couple were taking some items from the garage when I parked near the temple’s front door.  The structure itself is a modern colonial, typical of houses built in the surrounding neighborhoods.  I asked where the large Buddha, which stood on a painted white base, more than two-feet high,  had been taken to, but they said it was being cared for privately — for now, since the temple closed.

I asked if they minded me taking pictures of a much smaller Buddha, between 18- and 24- inches tall.

They  shrugged and went back to packing their car.

Here is the story of the temple’s demise — translated from its website.

“Respectfully to the monks and nuns

First of all, in the Wuhan Covid-19 epidemic that continues to rage around the globe, we sincerely pray together that humanity will find out a cure for prevention and treatment to save humanity soon; We Vietnamese should at least avoid this terrible tribulation because we have endured so much suffering before and after the devastating war in 1975.

Second, I would like to inform the monks, nuns and fellow Buddhists of the sad news that: During the last Vu Lan Bao Hieu online festival, the Supreme Master Master announced that the Phap Vuong Pagoda will be closed forever. From now to the end of 2020. He is partly because of old age and serious illness, partly because no one can carry and inherit the Buddha.

For nearly 20 years sharing the throne of the Three Jewels here, we would like to acknowledge and appreciate the merits of the monks, nuns and Buddhists everywhere who have contributed, donated as well as helped in all means. mentally and physically to serve the Buddha Dharma and Samsara. We hereby respectfully announce this to our fellow Buddhists from far and near to come to the pagoda, to invite the remains of their relatives to worship. Please contact us first, by phone: (703) 272-8108 or email: chuaphapvuongdc@gmail.com

We wish all the Venerable Monks, Nuns and fellow Buddhists of Bodhi mindlessness and happiness for perfect fulfillment.

The Board of Directors of Phap Vuong Pagoda”

MLS pictures with the two exceptions of shots of the large Buddha from the rear show an interior of a five-bedroom, three-bath plus house.

The only sign remaining of the temple is the small Buddha on the stump.