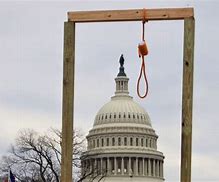 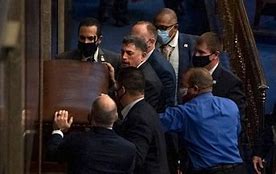 Drawn from Washington Post’s May 20 account of House vote on establishing Jan. 6 commission.

At one point during the Jan. 6 attack, a group of rioters began chanting, “Hang Mike Pence!” as they streamed through the main door on the east side of the Capitol. With the vice president that afternoon was his Indiana congressman brother Greg. “They huddled together inside a Capitol office guarded by Mike Pence’s Secret Service detail and later took an unknown evacuation route to a secure room in the Capitol complex.”

All of which makes Greg Pence’s statement even stranger: “Hanging Judge Nancy Pelosi is hellbent on pushing her version of partisan justice complete with a hand-picked jury that will carry out her pre-determined political execution of Donald Trump before law enforcement officials have completed their investigation.”

Well whether Benjamin Franklin shot back to John Hancock his too-good-to-be-true” witty “hang separately” remark following the signing of the Declaration of Independence is debatable, it certainly stands in sharp contrast to Greg Pence’s statement and vote. The Philadelphian, of course, was key figure in Joseph Ellis’ 2003 Pulitzer Prize winning book, “Founding Brothers.”

And in this rush of praising “famous men” for their votes May 19, we should not forget Andrew Clyde of Georgia who came to the aid of security details protecting the Senate chamber where the presidential vote was being certified Jan. 6. The barricade of the door with bodies, furniture, and guns held. The freshman Republican congressman  now identifies the people outside the door that afternoon  as taking part in a “normal tourist visit.” He voted no on establishing a commission.