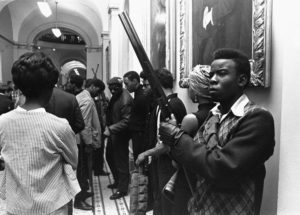 How quickly a state government — acting “in a bipartisan manner” — pass gun control legislation? Ronald Reagan’s California showed the way. In about two months, the divided legislature managed to pass a bill, sponsored by a Republican from the East Bay [yes, in those days, there were Republicans in the Bay Area] against carrying loaded firearms in public as “an urgency statue” requiring a two-thirds majority that the governor proudly signed.

Tis’ true. The “state-given” right was swept away, the Second Amendment to the federal Constitution ignored in the heat of a Sacramento summer in 1967. The governor offered this [now often re-quoted line — most recently after El Paso and Dayton mass killings, 14 years before he survived an assassination attempt outside a Washington hotel surrounded by armed Secret Service agents and Metro police], “There’s no reason why on the street today a citizen should be carrying loaded weapons.”

This year, in keeping with its own history, the Old Dominion’s General Assembly chose to not even “shelter in place” in the Capitol following the May 31 massacre in the municipal complex in Virginia Beach. The oldest continuous functioning legislative body in what is now the United States ran for shelter until after November’s off-year elections. The “lonely are the brave” passed the buck to the State Crime Commission to hold a hearing — a public “conversation,” our weasel word for every deadlock, dilemma, conundrum, quandry, and quagmire. To use the more appropriate, “standoff” comes readily to mind and trippingly off the tongue, to describe what happened.

Looking back to the slaughter at Virginia Tech in 2007, the guys and gals in Richmond approved restricting guns sales to a carefully defined group of mentally ill, something of a mantra now being espoused by 45 after an important phone call from a Northern Virginia not-for-profit.

But on the whole, in the intervening 12 years, the legislature ended the one gun-a-month club restriction, allowed concealed weapons in bars and restaurants, and oh yes, you may keep one handy in the glove compartment, along with the vehicle registration.

The difference between Richmond in 2019 and Sacramento in 1967:

Two dozen or so armed Black Panthers entering the State House, protesting proposed restrictions on carrying loaded weapons in public. They had been “copwatching” in Oakland. All perfectly legal … until.