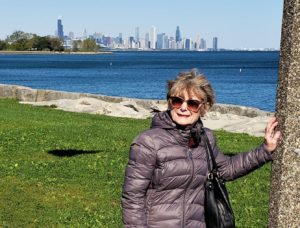 Took Lillian out to the Promontory, the manmade peninsula jutting into Lake Michigan in Chicago’s Hyde Park neighborhood last weekend. Although she had been to Chicago, she had never been much south of the Loop or certainly past the McCormick Place Convention Center. I believe the view of the skyline from here is breathtaking, the best in the city.

Last Saturday in the morning when we headed to the lakefront, the temperature was barely above freezing with winds gusting to 40 miles per hour. I had to return to Hyde Park not just for this view or to show it to Lillian, but to check on the Park District’s trees. For three summers in college, I trimmed those trees between 49th and 59th streets along the lake and westward to Woodlawn Avenue on Park District property.

However when the alewives, small ocean fish carried to Chicago through the St. Lawrence Seaway and died by the hundreds of thousands on city beaches, I like fellow Daily Illini alum Roger Simon, did nothing but rake up dead fish and load them into dump trunks. The real Mayor Daley demanded the beaches be kept open and the city no smellier than it was.

It took the introduction of Coho Salmon to the Great Lakes to revive the sports fishing industry but more importantly to Park District workers and Chicagoans, they ate the alewives before they washed ashore as carcasses.