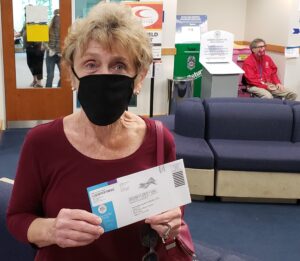 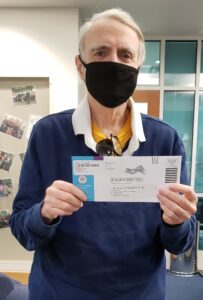 We Dared It All!
Voting at a Governmental Center in a GOP District
We followed the “Virginia Way” of the non-Australian [aka secret] ballot.
In a kitchen where no rum, whiskey, cider or beer flowed, Lillian and I, with pens in hand, filled out our ballots.
No, there was shouting or vote hustling at the table; but alas and alack, there also was not “straight ticket” filling in of ovals.
So on this first day, when the regional centers opened for “in-person” voting and the depositing of “pre-filled” ballots, we ventured out.
Oh. we were well aware of massive fraud, the postal service tossing our ballots into recycling bins and rivers and streams and horrors of horror where else. “Your favorite president” had raised the alarum!!!!!
But what we most feared, venturing out of the Land of the “White Democrats” into one of the last remaining citadels of the Grand Old Party of 45 holding onto a “paternal seat” [not making this stuff up] on the board of supervisors, was that depositing our “pre-filled ballot” into a “drop box” could be a scam, a hoax.
Or as the 45’ers said in California with their jokester “official” drop boxes “sucker” and “loser” to everyone who dropped a “pre-filled ballot into one of theirs.
Putting our full faith [and risking an auto da fe, so to say — burning of heretics for possibly voting the “wrong way”] into the box on Rolling Road was safe, secure despite it location, we deposited our ballots at a little after 2 p.m.
The lines for those who did NOT trust the integrity of the box reached far back into a police auxiliary parking lot. The regional poll had opened at 1.
We could have stuck the ballots in an envelope we both are holding and been done even more quickly since I parked the car in the adjacent Post Office customer lot.
We walked 100 yards to “deposit” in person, breezed into the offices, told to walk around the cushion, and drop the ballots in the box.
Wonder if the police who share this space are keeping an eye on that box?
ballotsdepositfraudGOPkitchenLand of the White Democratsmassiveregional centersRolling Roadstraightvote