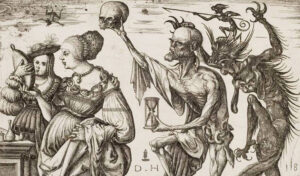 William Dalrymple’s “From the Holy Mountain”  is an “old book,” published in 1997, that tells the remarkable story of the disappearance  of the Christians from the Middle East where the religion was born.

He vowed to visit the landmark churches, monasteries, convents, caves, stylites [columns], or their ruins  of early Christianity and what became its Orthodox growth across the Middle East.

His guide for travel was the “Spiritual Meadow,”  John Moschos’s account, written in the late 6th century. It was John’s “ordered journey” that took him  from the Bosphorus to the Mediterranean coast to deep into desert Egypt. It was a vast land of hermits, prophets, monks, priests, heretics, and “pagans.” [Yep, good old Emperor Justinian was busy knocking down their “Temple of the Sun” in Ba’albek at the moment; he needed its pills for his new basilica, Hagia Sophia — Holy Wisdom in English, recently put into religious use again as the Hagia Sophia Grand Mosque].

So for Halloween, Dalrymple leaves us with this thought about the “holy men” and a warning applicable today hours before a presidential election.

Their “most important task was to fight the demons.  The world was believed to be besieged by invisible agents of darkness, and to sin was not merely to err; it was to be overcome by these sinister forces. Demonic activity was a daily irritation and was believed to intrude on the most ordinary, domestic activities.”

Good ole John gives us the story of what happens when a “troop of demons” descends on a nunnery in Lycia [mountainous southwest coast of Turkey].

“Five of the virgins conspired to run away from the monastery and find themselves husbands.”

And yep, “Like the Muslim djinns, which superseded them, Byzantine demons lurked especially in old temples and remote hillsides.”

Stay away from “temples and remote hillsides.”

Death and the devil may surprise you.