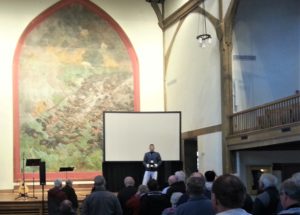 During this weekend’s Army Historical Foundation staff ride on Thomas Jackson’s 1862 Valley Campaign, we stopped at the Virginia Military Institute in Lexington. The statue, Virginia Mourns Her Dead, was done by Moses Ezekial, the first Jewish cadet to attend VMI.  He, along with 256, fought on the side of the Confederacy in the 1864 Battle of New Market, depicted in the mural in the chapel, which has been set for Sunday services. One of the 10 cadets who died as a result of  the fighting was his roommate; and all are commemorated with plaques at the foot of the statue in front of the engineering building.  Levy first studied art in Cincinnati after the Civil War.  He then went to Europe and spent many years in Rome.  He was regularly commissioned to sculpt works marking historic events, often Confederate Civil War memorials, and towering figures in the art and literature.  Levy was twice knighted.