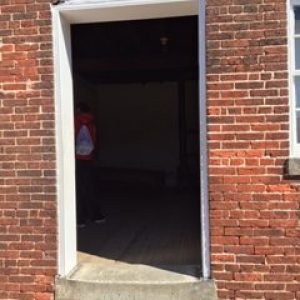 The cell were Beall was shackled at Fort McHenry, Baltimore

Well, not quite, but I will be talk about John Yates Beall’s days of raiding on the Chesapeake Bay at the May conference of the North American Society for Oceanic History in Charleston in mid-May.  For his efforts to raise hell with the Union, he was thrown into a cell and shackled in heavy irons at Fort McHenry, Baltimore.  He barely escaped with his life — that time.

Here’s what I am going to talk about:

Before leaving Canada in 1863, still recovering from wounds received in a skirmish, John Yates Beall mulled over ideas of taking the Civil War to the North — as a cavalry raider, a privateer, or a guerrilla.

Here in embryo was how the war actually came to the Great Lakes with daring practices raids and seizures on the Chesapeake Bay.

The port cities –Buffalo, Erie, Cleveland, Chicago, Milwaukee, Detroit — were relatively undefended on land. Under treaty with Great Britain, only one American warship plied the Great Lakes. Threaten the cities with destruction “unless redeemed by heavy subscriptions,” a tactic Confederate raiders on land used during their forays into the North or on Union held territories.

And, oh yes, there were other tempting targets for the Confederates — like Johnson’s Island off Sandusky, Ohio, and Camp Douglas on the shores of Lake Michigan in Chicago that housed thousands of  prisoners of war, men who could be returned to the fight.

Exactly how Beall saw any men he raised for lightning strikes on land or raiding Union ships in coastal trading fitting into Confederate war plans is not clear.  They certainly weren’t to be conventional soldiers or sailors, so if captured they might be hanged  as spies, saboteurs, or pirates on the spot.

Now back in Richmond, Beall had friends with access to men who could open doors to men in very high places. There, he met with a Jefferson County friend, Edwin Lee, a cousin of Robert E. Lee, commander of the Army of Northern Virginia.  Like Beall, Edwin Lee, carrying the rank of colonel, was also out of the fighting, “showing signs of tuberculosis.”

The new grand idea that they grabbed onto  merged  Beall’s  fancy  of becoming a privateer with his thought of demanding tribute from the Great Lakes cities  and freeing Confederate prisoners of war  on those shores. In their minds at least, British neutrality shouldn’t be a question.

As random thoughts coalesced,  a fallback plan was developing to wage naval guerrilla war on the Chesapeake.  A selling point was how such raids could ease pressure on Richmond from the Union Army.

Beall was determined to be heard, and Lee had the key to opening the doors to  Davis and his cabinet.

The embryo was growing.

BeallChesapeakeCivil WarFort McHenryNorth American Society for Oceanic History
Share This
RECENT POST
CONTACT
703-250-4869
john@johngradynowandthen.com
If your organization is interested in having John speak at your event, please call: 703-250-4869 or email john@johngradynowandthen.com
CONTACT JOHN
© Copyright 2018 | John Grady | All Rights Reserved | Site by d2dcreative.com
Back To Top
×