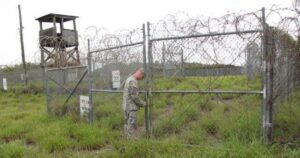 Another Unanswered Question After All These Years

With the 19th anniversary of the terrorist attacks on the United States and the 15th anniversary of my reporting trip to Guantanamo Bay nearing, I was struck by two pieces in the New York Times that reflect how little interest remains among  “we the people” on how my “fellow Americans” should exact or expect “justice” after such a murderous  outrage.

Of course, 45, the banger of the big drum of “fighting fire with fire” — his words, not mine — said shortly after his inauguration that he would bring back waterboarding and other  “harsh interrogation” techniques to deal with captured suspected  terrorists, like Khalid Sheik Mohammed, “the mastermind of 9/11,” as he was called, who fell into American hands.

45’s specific reference was to “detainees” who aided, abetted, and fought alongside the Islamic State.  But the “what to do” question with these “bad actors” in its latest iteration dates back to the captured Taliban, Afghan and otherwise like American John Walker Lindh, grabbed early on after the hijacked jetliner attacks on New York and Pentagon.

The question remains unanswered, like will remain so well into the future.

Of course, 45’s idea of taking out of mothballs “harsh” questioning would have been against U.S. law. So, in truth, as far as we know, the assertion just hung out there until 45 overrode it with another outburst on some other topic. “Looting” and “Shooting” of more recent usage comes to mind.

Finally, after nine years, FBI agent Ali Soufan’s “The Black Banners (Declassified): How Torture Derailed the War on Terror After 9/11” will see the light of day. This is a firsthand take on what the Senate discovered in its investigation of what the CIA accomplished with these “techniques.” He told the Times the idea that the CIA and FBI successfully played “good cop/bad cop” roles in interrogations was not true.

Soufan “said the C.I.A.’s experimentation with torture was not just ineffective but interrupted and hindered a professional interrogation that obtained useful information without abuse.”

[Anyone remember John McCain saying POWs like himself would say anything to stop the abuse.]

The second story was Carol Rosenberg’s “mea culpa” of expecting a busy year at Gitmo in handling terrorists’ cases, some of them dating back the full 19 years since the attack. And no one — other than maybe  handful of the detainees — has been commuting back to the far end of Cuba to cover this story.  It was “hers” at the Miami Herald from the start and is still “hers” at the Times.

She wrote Aug. 26 in page 2 “The Story Behind the Story” column:

“No hearing has been held since late February. No reporter has set foot on the 45-square-mile base of 6,000 residents behind a Cuban minefield, among them 250 school children whose Navy and contractor parents have mostly opted to send them to study at the base school rather than to learn remotely. None of the 40 wartime prisoners there have had an in-person legal meeting since the World Health Organization declared the coronavirus a pandemic on March 11.

“Guantánamo today is in a bit of a mix-and-match existence. The gym, outdoor cinemas and churches are open, with social-distancing policies in place. New soldiers from mostly Army National Guard units still arrive on nine-month tours of duty and are put in isolation for two weeks. But after confirming two Covid-19 cases in March and April, the military is now forbidden from discussing new cases.

“Flights are infrequent, except for the twice weekly refrigerator plane that brings fresh fruits and vegetables. Visitors are rare. Judges in the two capital cases — against the men accused of plotting 9/11 and another man accused of conspiring in the U.S.S. Cole bombing, in 2000 — have canceled six scheduled hearings so far. One declared the prison’s plan for a 14-day quarantine for newcomers “unduly burdensome.”

“Life on the base has in some respects reverted to its time as a mostly forgotten backwater before the Marines walked 20 prisoners off a now defunct C-141 Starlifter cargo plane and opened Camp X-Ray on Jan. 11, 2002.”

The personal note: KSM was taken to Guantanamo while I was there; of course, I didn’t know of his and two others at the time.  The “review record” hearing of a detainee I and several other reporters were to cover was canceled.  Defense attorneys were being changed.

Camp X-Ray had already been closed for five years when I arrived, but all reporters were taken to it to show how conditions had changed for “detainees” since the first were brought to the naval base for “swift” prosecution. It was weed-filled, rusting chain link and barbed wire, overrun by large, fat “banana rats.”

Shortly after the first prisoners were captured, the decision was made inside the administration that foreign nationals would be handled through military commissions rather than federal courts to avoid questions of habeas corpus, hearsay evidence, coercion of defendants, etc.

Equally adamant, Congress refused to allow the moving of detainees to the American homeland for either pre-trial confinement or permanent detention

And so, here we are almost two decades later without an answer as to how “we the people” will