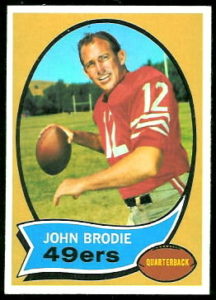 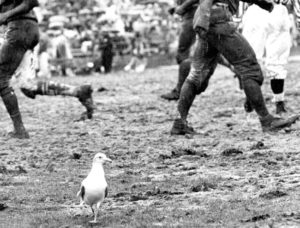 New York Times photo of a seagull between the lines at Kezar Stadium in Golden Gate Park, where John Brodie quarterbacked the Niners for years.

Although I had to make life choices at an early age — Sox fan or Cubs; Bears or Cardinals [yes, they played in Chicago at old Comiskey and unadulterated Solider Field]; Illini or Fighting Irish [Northwestern, not considered], I had a chance to experience the craziness of the San Francisco 49ers, playing in Kezar Stadium [where there were no good seats] in the late Sixties.

The “stadium” is in the southeast corner of Golden Gate Park, not far from Haight and what was the detritus of the “Summer of Love.” The roadways around Kezar were blast-paths for Hell’s Angels — and seemingly dozens of other “1 percenter clubs,” thugs on bikes for the uninitiated, see Hunter S. Thompson for details — roaring through the greensward to the sea, back from the sea, and so forth and so on.

And seagulls by the dozens, hundreds — depending on the weather, the dirtier it was the more they attended, especially on the playing field, a miniscule part of the almost 60,000-space [not space bleachers only, as I remember] could determine the game’s outcome.

Being football what is and has long been, there was a quarterback controversy that the Sporting Green in the Chronicle sort of covered for the “49er Faithful” or sometimes written “Forty-Niner Faithful” [fight song of the time had the team “dig, dig for victory,” sorta like “bear down Chicago Bears, bear down to victory.”‘ It involved then sore-armed aging golden boy John Brodie [born in Menlo Park, conveniently football-educated at Stanford] and Heisman Trophy-winner and part-time punter Steve Spurrier [before his “Ole Ball Coach” days] vying for the starting spot in a losing season.

In my federal government-assigned time in California, I saw two games there. The facility, named in honor of Mary Kezar’s mother — after all the dutiful daughter threw $100,000 into the supervisors’ lap and said “do this” and they did — had for decades provided an arena for diversion — high school track and fielders and ballers as well as ‘Niners.

In the fall of 1969, better to look to the gulls than the hundreds of thousands marching up and down the hills from the Embaradero — love that name, ever since “San Francisco Beat” first ran on b&w TV — to the “Polo Field” in the park concert culminating the “End the War” rally.

That rally, held on the same days as the Moratorium march in Washington, was held Nov. 15, 1969/

[Endnote 1. The march fittingly and historically had to end at the Polo Field. After all. its historic significance came the birthplace of the “Human Be-In” two years before. And, the field only a few months before in June was the site of the free, repeat FREE, and in case you missed it earlier, FREE concert featuring two local bands — Grateful Dead and Jefferson Airplane.]

As one of my wartime roommates noted then, the march and concert was “a good place to meet women.” Keen observer of possibilities that he was, it was corroborated by reports in the “rock solid” support of the war Examiner’s tally, quoting police, of 80,000 spending their Saturday in “The City’s,” always capitalized, protest. Of course, my “battle buddy” was conveniently ignoring the war that brought us together in the first place.

On protest or inauguration numbers of attendees, like quarterback controversies, the “New Mobe,” through an unidentified spokesman quoted in the story, counted 250,000 in the march and concert that followed.

Yet “Amazingly, there was no trouble,” William Flynn’s second paragraph read, further corroboration of the roommate’s proposition of a good place to meet women — safer than many bars.

For historical probity need to add, the Hearst paper, which provided the news section in Sunday’s “Super Chron,” the artful dodge in federal anti-trust law to keep failing newspaper alive at the time, added other marchers’ demands included ending poverty and racism “among a number of domestic demands.” The story added these demands were unrelated to the Vietnam War, in case a reader couldn’t figure that out.

The ah-ha moment: “Almost conspicuous by their absence were blacks; but Mexican-Americans participated.”

From foggy memory of the crowd at the game itself, which the stumbling Forty-Niners won by a field goal, I remember very few African-Americans or Hispanics sitting around us in the end zone. But what remains clear in my mind was talking with a dozen or so Chinese-American male college students by us. They were asking about our thoughts on the war, what basic training was like [Lackalnd is not the same as Parris Island or Pendleton], yesterday’s march, the student strike at San Francisco State, the “et al.” of the day.

Had to look this up, but the Examiner’s lead editorial that Sunday was “The Quiet Ones in the Services,” figured it had to be something along those lines.

Hmmmmmh! “The quiet ones. Not with the “Tet War Babies,” as we called ourselves, and “draft-induced volunteers,” as the Air Force categorized us. College-degree holders in basic segregated by flight from non-degree holders was my experience in South Texas.

Funny how the passed-around joints and the back-and-forth conversation remain sharper than almost anything else about my final day at Kezar.

So today, to honor that passing of a few hours on a mid-November sabbath, I will again be a “Forty-Niner Faithful.” Have to admit: Never saw them play in Candlestick, but at least it was still in The City in the Joe Montana-Steve Young days of glory. Santa Clara, well, it ain’t even on the Peninsula, but ….