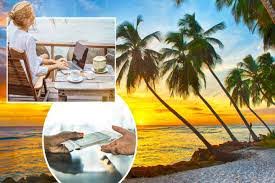 Barbadoesed: ‘Plague,’ ‘Beaches,’ ‘Remote Work’ now
Vs. ‘Indentures,’ ‘Slaves,’ Sugar, Rum Then
I confess I love “Today’s World View” in the Washington Post for its offbeat look at exotic places.
The first two paragraphs are from Adam Taylor’s July 18 “View” on Barbadoes. Though I have been on Caribbean islands for both work and vacation, I admit never to have been there.
“This has been the year a virus shut down our globalized lives. In the first half of 2020, governments around the world imposed entry restrictions or strict quarantine procedures; flight traffic fell to its lowest level in decades. Many are confined not just to their countries, but also to their homes, as offices were shut down along with travel.
But even as the pandemic continues to rage, the government of Barbados, a country in the eastern Caribbean, is sending a very different message: Come here, not just for a holiday, but for up to a year. Bring your laptop. Soak up the sun, the sea, the sand — and forget about the coronavirus.
‘“Covid-19 has placed a severe strain on people’s mental wellness,” Barbadian Prime Minister Mia Mottley told Today’s WorldView in an interview. “The sunshine is powerful. The seawater is powerful. They’re both therapeutic in ways that are hard to explain. And we felt that, why not share it?”
I agree.
Why not share it? Having spent several weeks two winters ago reading account after account of the island as a miniscule part of book project that continued to grow like topsy, I became very familiar with its “history.”
Barbadoes in its earliest days certainly put a “severe strain on people’s mental wellness.”
So let’s start where I started in Scotland in the 17th century, a bad hundred years for them. I could have begun in Africa or on the indigenous people living on the island itself; but for the sake of the book, I needed to launch from a crushing defeat on another island — far away.
The Scots had rallied to the side of Charles II to restore the Stuart line to the English throne. At Dunbar, “the Scots were driven like turkey; Oliver Cromwell’s out-numbered forces had killed three-thousand on the battlefield and force-marched another ten-thousand to Northumbria.
To neutralize the Scots’ officers, as the triumphant English did with thousands of others, they had transported the worst offenders, usually surviving officers, first to Ireland. There, with a swipe of a pen, the worst of the worst surviving offenders were “Barbadoesed.”
Yep, that was the term of the time.
A dot in the Caribbean, the island’s economy was massively shifting from small plantings of a cotton and tobacco and meager earning to the sweet “cash crop,” sugar cane of immediate prosperity built on scale and slavery. The English proprietors on the island and in London had their long-standing rivals, the Dutch, to thank for junking the Chesapeake colonial model. Having been thrown out of Brazil by the nasty Portuguese, they brought their “sweet
talents” to this remote outpost of a budding mercantile empire.
The prisoners from Ireland and Scotland, labeled indentured; the captured Africans whose status was fluctuating at the moment; and indigenous “wilde” slaves transformed Barbadoes into an isle of plantations. To the proprietors, Parliament, and the Privy Council, Barbadoes, with 30,000 inhabitants — free, indentured, and slave, was no longer the “dunghill whereon England doth cast forth its rubbish.” The few at the pyramid’s top looked upon Barbadoes to be “this happy island,” as they toted up the profits from refined sugar and piled on the earnings from its byproducts –molasses and rum. In less, than a generation, there was scant room for men of little means. And the march through
the indentures became a race to a “slave” economy, “stable” and replaceable labor to “refine” more profits.
The status of the Africans stopped fluctuating; they were slaves.
Barbadoxcoronavirus. laptopcottonindenturedIrelandislandScotlandslavesugartobacco
Share This
RECENT POST
CONTACT
703-250-4869
john@johngradynowandthen.com
If your organization is interested in having John speak at your event, please call: 703-250-4869 or email john@johngradynowandthen.com
CONTACT JOHN
© Copyright 2018 | John Grady | All Rights Reserved | Site by d2dcreative.com
Back To Top
×